Named after the color of seawater, aquamarine is the stunning cool, blue variety of the mineral beryl and the official birthstone for the month of March. 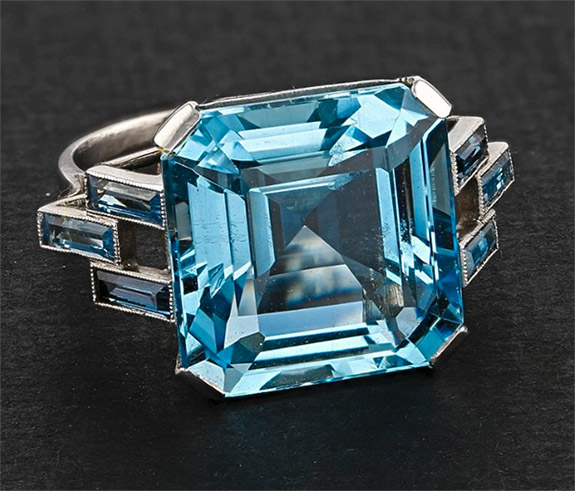 A museum-worthy example of aquamarine is seen in this Art Deco platinum ring that was once owned by Lady Annie Francis Cullinan (1866-1963), the wife of Thomas Cullinan, who owned the Premier Mine in South Africa when the 3,106-carat Cullinan Diamond was discovered there in 1905.

Showcasing an intense blue square-cut aquamarine, the ring was later obtained by California jeweler Stephen Silver, who donated it to the Smithsonian in 2017. The piece is now part of the National Gem and Mineral Collection at the National Museum of Natural History in Washington, DC.

Aquamarines can range in color from light blue and pure blue to shades of greenish-blue. The variations in blue color are dependent on trace amounts of iron in the gemstone’s chemical composition.

The name “aquamarine” is a combination of two Latin words, “aqua” for “water” and “marina” meaning “of the sea.”

Beryl rates 7.5 to 8 on the Mohs hardness scale, making it suitable for fine jewelry.

Aquamarine is a symbol of youth, hope, health and fidelity. Legend states that Neptune, the Roman Sea God, gifted aquamarines to the mermaids, thus bringing love to all who have owned it.

The largest gem-quality aquamarine ever mined weighed in at 244 pounds and was sourced from the Minas Gerais region of Brazil in 1910. Aquamarines are mined in many countries, including Nigeria, Madagascar, Zambia, Pakistan, Mozambique and the U.S., but most of the finest-quality gemstones come from Brazil.

Lady Annie Francis Cullinan, whose aquamarine ring is featured (above), will be forever linked with the 3,106-carat Cullinan Diamond — the largest rough diamond ever discovered. Her husband, Thomas, sold the diamond to the Transvaal provincial government, which, in turn, presented the stone to Britain’s King Edward VII as a birthday gift in 1907.

In its original form, the gem measured 10.1cm x 6.35cm x 5.9 cm, but in February 1908, the Cullinan Diamond was segmented into nine major finished stones, each of which was given the name Cullinan and a Roman numeral. Two of the gems are part of the the British Crown Jewels — the Great Star of Africa (Cullinan I) at 530.4 carats and the Second Star of Africa (Cullinan II) at 317.4 carats. The other seven stones remain in the private collection of Queen Elizabeth II.